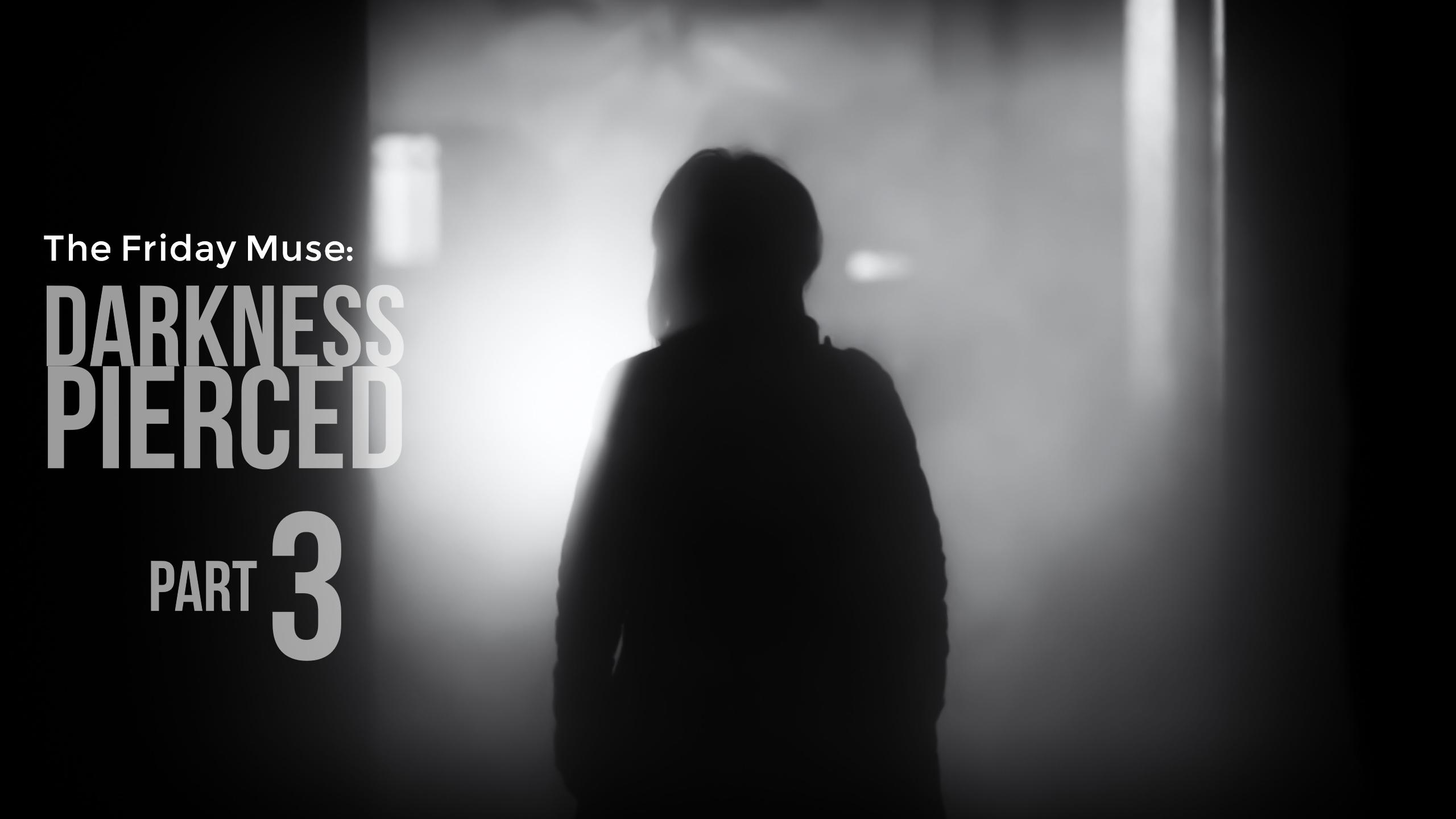 When Melissa Robinson left the candlelit safety of the guest room in Turnkey’s farmhouse, she entered a darkness so thick and so consuming that she swore she had died and entered hell. Her eyes wouldn’t adjust to it, the shadows grazed her skin like strands of silk, and the smell of rotting meat made her want to retch.

Maybe I should have listened to the cat.

Really? she scolded herself. The cat? The talking cat? Melissa took a deep breath, and the air weighed in her lungs. “Hello?” she called out.

“Me?” she said, spinning around. The origin point of the voice was in her ear, but also many feet away from her, in all directions.

“There is no savior here.”

“Who are you? What do you want? Please…I just want to go home.”

“Where is your home, girl? The bottom of the frozen pond? The lonely apartment? The guest room?”

“Your apartment? Where you feel the loneliest?”

The temperature in the darkness dropped drastically, and she couldn’t help but shiver. The dress she had been given to wear hung on her like paper mâché. The shadow felt like cold water across her skin.

“You know you are not alive, right? You are dead. You died in the pond. You died alone.”

Melissa shook her head. “I’m not dead.” She stretched her hands out before her, as if she could see them, and flexed her fingers to prove to herself she was still alive.

“Your death has brought you here, and there will be no reprieve.”

Melissa gasped. She felt fragments of ice moving through the darkness, sliding across her skin, chilling her to the bone. She was sure if she could see that she would be able to see her breath curling up from her thin lips. Her teeth chattered, and her knees wobbled.

Even though she was in complete darkness, she closed her eyes, more out of habit than anything else. She whispered a prayer.

She prayed for what felt like hours. She knew there was nothing else to do in the darkness but pray.

She heard a murmur roll through the shadows, approving of her decision.

Light suddenly filled her vision. She cracked open her eyes and saw, burned into the skin of her right wrist, branded into her flesh, a symbol: three horizontal lines parallel to each other, a dot piercing the center of the middle line. That dot glowed a brilliant display of colors, while the lines pulsed with a bright white glow, illuminating the darkness around her.

The mark didn’t hurt, although the flesh around it felt hot, like she was holding her hand over a lit candle.

Warmth filled her bones, melting the chill that threatened to consume her.

The darkness hissed. She sat up and then stood to her feet. She could see the texture of the darkness before her, wisps of black shadow fleeing from her illuminated frame. No, being burned by it, small orange embers dropping from wherever the light touched the darkness. She stepped forward and the light from her mark pierced the black, creating a pathway through the room. The shadows hissed and spat at her.

Where is the front door? How do I get out of here? What floor am I on?

She found an old and beaten door in the wall. Taking hold of the brass knob, she sought to leave Turnkey’s farmhouse for good. But in the corner of her eye, she spotted an object in the corner of the darkened room. When she turned toward it, she found an old man hunched over in a rickety rocking chair. Under the shade of his straw hat, his eyes looked closed.

Who is that? Is he dead? I have to leave…

She turned the knob, but something in her spirit told her to stop. She turned to the old man again. What if that’s Turnkey?

She released her white-knuckled grip on the doorknob and stepped over to the rocking chair. The light from her wrist lit up the entire corner of the room, exposing a brown, mold-ridden wallpaper covering the surface of the wall.

The old man barely moved, cranking his arm up to shield his eyes from her brightness. “Who goes there,” he said. His voice was gruff, scratchy. There was an air of hopelessness in it, an air of defeat.

“Melissa,” she whispered, her spirit fighting that air of hopelessness.

He said nothing. The rocking chair creaked vehemently as he used his arms to push himself up and out of it.

The old man stood there in the darkness. Old, frail, his eyes vacant of any sign of life, he looked like a withered corn husk. She found nothing sinister about him. In fact, she felt an incredible blanket of peace over her spirit.

“Come with me,” she said, extending her hand to him.

He shook his head slowly. “I…I cannot. This is my home.”

Melissa stepped toward him. “Please,” she whispered. “Come with me. Let’s leave together. This is no place for you.”

Turnkey reached his hand out to her, his arm almost resembling a dead branch. “I…”

Melissa reached out and took hold of Turnkey’s hand. It felt like she had reached into a barrel of bad apples. She could smell the rot on him – a mixture of manure, rotten eggs, and sawdust.

Melissa led the old man to the door. When she opened it, moonlight poured into the old farmhouse. The darkness fled. The lights on the estate flickered on.

She took Turnkey outside, onto the porch, then into the dirt driveway. The air felt warm around them, and the light from her wrist basked them in a beautiful glow.

A black cat strolled out of the house, its emerald green eyes glittering under the moonlight. Melissa reached down to pet it, but the cat skitted off toward the barn, vanishing into the shadows there.

Turnkey took a deep breath, and life returned to his eyes. “You saved me, child.”

The glow left her wrist, but the marks remained. “It wasn’t me.”

The Friday Muse – My Fiction Year In Review

The Friday Muse – The Stars Are Brightly Shining