Today’s Friday Muse piece is another short snippet that I know will at some point lead to a bigger story. It seems someone has found a way to keep the alien/demonic entity of Legion (found in my Black Earth series) at bay, but nothing is ever what it seems…

Crystals
The red hue emanating from the fist-sized crystal shard reminded her of the lava pits of Endwon.

“You must handle the crystal carefully, your majesty,” Cedrick advised.

Breata huffed. “This is the fifth shard I have recovered in the last Universal Year, Cedrick. I don’t need a lecture on how fragile and unstable they are.”

Cedrick took his worn brown cap off and bowed. “My apologies.”

Breata brushed her hands, which were covered in sweat and grime, on Cedrick’s cap before he placed it back atop his head. “I would much rather have come to these caverns in more appropriate attire.”

Cedrick cleared his throat. “I sincerely think the blue gown you picked out for our excursion makes you look the part of royalty – which is what we needed the denizens of this planet to believe if they were to let you near this specific shard.”

She glanced down at the hem of her gown, covered in mud from their trek into the cavern. The glow from the red crystal shard made the brown dirt look black – like Legion’s dark form – against her attire. With much resolve, she thrust her hands toward the rock wall and took hold of the crystal shard embedded within.

“Careful!” Cedrick snapped. “If you break that shard, the magic energy within it will kill us!”

Breata sighed. “When we get back to Endwon, will you do me a favor and grow a pair?” She grasped tightly to the shard and pulled on it. The crystal came free from the weak rock. She held it up in front of her face, feeling its warmth against her skin, and grinned. “One step closer, Cedrick. One step closer to defeating Legion once and for all.” 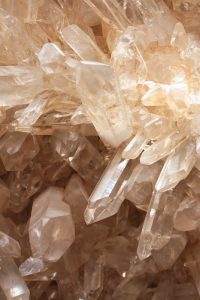 Cedrick chuckled. “Hardly a step toward such a lofty achievement, your majesty. This crystal shard – well, enough of them – will simply keep Legion at bay, it will do nothing to destroy Legion.”

She took the burgundy-colored pouch fastened to her wrist and slid the crystal inside it. “That in itself brings us one step closer to defeating Legion for good. Have you no sense today?”

A loud click echoed through the cavern corridors. Breata turned to Cedrick, her earlier suspicions confirmed when she saw the energy pistol in his hand, pointed directly at her. He held his other hand out toward her. “I’m sorry to do this, your majesty, but I’m going to have to insist you hand that pouch over to me.”

“Your words don’t fool me,” Breata said, placing the pouch in his palm. “You’re not sorry. I had my suspicions about you since the day you requested to accompany me to this place.”

He grinned, shoving the pouch into his coat pocket. “If you suspected me for a traitor, maybe you should have done something to prevent this.”

“I hoped my suspicion was just that. I placed my faith and trust in you.”

“And look what you get for it,” he said, slowly backing up toward the entrance of the cavern. “You get abandoned here on a desolate world outside of your own star system. I’ll make sure to inform the kingdom that their royal majesty was killed valiantly attempting to retrieve the Sols crystal before it shattered and she was killed instantly by the magic residing within.”

“That doesn’t sound rehearsed at all.”

He stopped backtracking and tilted his head. “You don’t seem that concerned in regards to your predicament, your majesty.”

“Is that what you want to see? Fear? Begging? I will give you neither. I’ll find a way off this world and I will hunt you down and make sure I get back what is rightfully the Kingdom of Edwon’s.”

“Correction, your majesty, I will make sure to give the Kingdom of Edwon’s what is rightfully theirs: judgment.”

The Friday Muse – Bottle In The Water